The day was perfect; one of those low humidity, blue sky, breeze-off-the-lake days that made tourists flock to central Florida. Green and yellow tents filled the park and costumes were the attire of choice. Dogs in costumes, babies in costumes, teens in costumes, turtles in costumes; every life form Andi encountered wore a costume.
Her own costume was her usual jeans and boots, topped by a red tank and a red cap to match the red linen covering the platter of cupcakes in her hands. This year the cupcakes were salted caramel apple. The recipe was new and the friends who’d taste-tested had raved over them. They were sinfully delicious and should easily be the best cupcakes in the park.
She’d still baked three batches before she was satisfied. Competition in the Cupcake Wars at the annual Cooter Festival was always fierce.
She signed in, took her number, and walked to the table at the end of the tent. To get to her assigned spot, she had to step around a lumbering turtle. The damp lettuce leaf draped over its shell was only partly a costume. The real reason for the decoration was that the turtles—or cooters as the locals called them—were well cared for and the festival organizers were making sure this one stayed cool.
Andi put the cupcakes and her bag on the table and took her place beside a leggy teen. The girl had crafted sugar lily pads, fairy wings, and miniature frogs to go with her mint and chocolate cupcakes. With their pink frosting and blue polka dots, the cupcakes seemed ready for an impish tea party as she positioned them on a miniature tree-shaped stand.
After Andi finished setting her cupcakes on the upended crystal goblets she’d brought, she walked along the exhibit table to greet the other contestants. The confections were as varied as the bakers. Classic vanilla, red velvet, peanut butter truffle, tiramisu, banana walnut, double maple, pumpkin spice—all mouthwateringly scrumptious and worthy adversaries. With luck the proud presenters would not be sore losers.
When the judging began, Andi took her assigned place and handed out samples to the judges. As her friends had proclaimed, her cupcakes got high marks for taste. But when all the votes were tallied, the leggy teen’s presentation won the blue ribbon.
Andi congratulated the young baker and admired the silky ribbon. Then she distributed the rest of the salted caramel apple cupcakes to the passers-by and packed her goblets. As she stepped past the exhibit table, she hooked her boot around the metal leg and tugged. The table tipped. The teen’s beautiful display landed in the dirt with a splat, icing-side down. The other contestants gasped. The lettuce-draped turtle moved in for a taste.
Andi settled her hat more securely over her hair so her horns wouldn’t show and elbowed her way through the crowd.
There might have been better cupcakes than hers in the park that day.
But she didn’t think so. 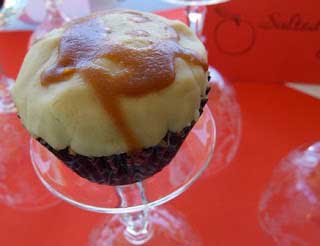 Preheat oven to 350° F.
Put ¼ cup apples and 1 tablespoon butter in a bowl and microwave for 1 minute at 50% power to soften. Mash with a fork (lumps are okay). Let cool.
Cream together the stick of softened butter and brown sugar. Blend eggs and vanilla into the creamed mixture. Add the mashed apples and heavy cream to the batter and mix well.
In a small bowl stir together flour, baking soda, salt, and pumpkin pie spice. Add to wet ingredients and mix thoroughly. Batter will be thick.
Fold chopped apple pieces into batter.
Line a 12-muffin tin with baking cups. Spoon batter evenly into the cups.
Bake 20 minutes.
Let cupcakes rest in pan for five minutes. Transfer to baking rack to cool completely.

Heat sugar and water in pot on stove over medium-high heat, stirring constantly until sugar is dissolved and mixture boils.
Let mixture boil without further stirring until it browns to the color of caramel. Add butter and stir until butter is melted.
Remove from heat. Add heavy cream. Stir until the bubbling stops and the sauce is smooth. Drizzle over cupcakes.
For additional flavor, garnish cupcakes with a sprinkle of salt.

HL Carpenter is a mother/daughter author duo who write family-friendly fiction from their studios in Carpenter Country, a magical place that, like their stories, is unreal but not untrue.
When they’re not writing, the Carpenters enjoy exploring the Land of What-If and practicing the fine art of Curiosity. Learn more about HL’s multi-genre books, enjoy gift reads, excerpts, and find out what’s happening in Carpenter Country on their website http://www.hlcarpenter.com/.
Stay connected on Pinterest https://www.pinterest.com/hlcarpenter/, Google+ https://plus.google.com/u/0/102212877836673370583/posts and Twitter https://twitter.com/hl_carpenter.
cupcakes dessert fall HL Carpenter Recipe Wednesday