A DIFFERENT VIEWPOINT by Anne Montgomery 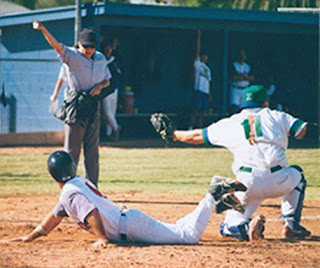 Twenty years into my officiating career, my superiors finally relented and allowed me and my peers to wear sunglasses in the field, but, by then, my eyes were already damaged.
“You’re blood pressure is a little high,” the nurse said.

I smiled. “Could it be that you’re about to stick sharp objects in my eyeball while I’m awake?”
My flippant answer belied the fact that I was certainly nervous, since the surgeon would soon be probing the inner recesses of my eye which a scalpel, a tiny ultrasound wand, and an itty-bitty vacuum cleaner. That I had waited patiently for my insurance company to cover the surgery for years did not make me feel any better as they wheeled me into the operating room.

My vision had been deteriorating for a decade. I can now hear those coaches who have complained about my officiating screaming in unison: “We always knew she was blind!” Admittedly, while I could certainly see all those behemoths holding on the line and the players who felt it necessary to dump a defenseless quarterback on his butt for no reason, I did sometimes lose sight of the ball in the hazy glow of the stadium lights. Don’t ask about baseballs. I tried to always work the plate, because, in the field, those flying projectiles would periodically fade and, more times than I’d like to recall, I ended up with a bruise, replete with seams. Off the field, nighttime driving became difficult: headlights in the dark were punctuated by colorful sparks shooting in all directions.

According to the National Eye Institute, a cataract is a clouding of the lens in the eye that affects vision. By age eighty, more than half of all Americans either have a cataract or have had cataract surgery. While my parents did not undergo the operation until they were in their eighties, my turn came at the tender age of 59.

What caused me to begin losing my vision at a relatively young age? Officiating. It was once believed that sports officials should never wear sunglasses, an effort to cut down on the above mentioned, “Geez, ump, you blind?” quips.

Today, especially here in the Arizona desert, the idea seems ridiculous. Then again, you may recall coaches used to think it was a good idea to deny players water during practice. Thankfully, philosophies have changed. Sports officials now often wear sunglasses, but those years without eye protection took their toll.

While cataracts can result from certain health issues like diabetes and from tobacco and alcohol use – I’m hoping Chardonnay doesn’t count here – prolonged exposure to sunlight is definitely a cause. I probably spent the first twenty years of my officiating career squinting in the sun. And, since my eyes are a light blue, I was the poster child for cataracts.

As it turned out, the surgery was a breeze: quick and painless. As a bonus, while the surgeon was mucking about in my eye, I was treated to a color show reminiscent of an Impressionist painting. The drops used to dilate your pupil are heavy-duty and last twenty-four hours, so driving is out. After that, there’s only a little scratchiness and a regime of drops for about two weeks.

There are a few shocks when your vision adjusts. There’s a depth to objects that had been missing, the loss of which was so gradual I didn’t know it was gone until I stood before my rock box. I’m a mineral collector. Hundreds of specimens I’ve gathered since I was a child rest in a pine and glass case in my living room. Each night before going to bed, I look at the rocks. My friends know to be wary when asking about the specimens, since – given the right amount of wine – I am apt to tell you long stories about where and when I got them, whether you want to know or not. The night after my surgery, I approached the box to take my nightly look and turn off the lights. Colors leaped out, richer than I’d seen in years. Crystal facets glittered. It was like meeting old friends after a long separation.

However, my new peppers have also prominently displayed a few things I’d, quite frankly, rather not have seen. My house is not quite the paragon of cleanliness I’d always imagined. Dust bunnies and not-so-immaculate tile floors accuse me of shirking my domestic responsibilities. But the biggest surprise came when I looked in the mirror. When did all those wrinkles appear? Like an aging on-camera news anchor shot through a gauzy filter, I’d been seeing myself through a similarly cloudy lens for years.

And here I thought I’d been aging so gracefully.

And now a peek into my latest novel for your reading pleasure. 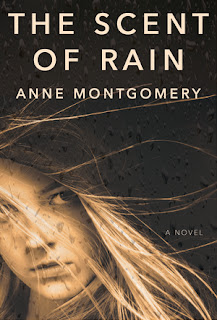 Two Arizona teens find their fates intertwined. Are there any adults they can trust? Can they even trust each other?

Rose Madsen will do anything to keep from being married off to one of the men in her Fundamentalist Mormon (FLDS) community, even endure the continued beatings and abuse of her mother. But when her mentally handicapped baby sister is forced to strangle the bird she loves at the behest of the Prophet, Rose frees the bird and runs away.

Adan Reyes will do anything to escape the abusive foster care system in Phoenix, even leaving his good friends and successful high school athletic career behind him. Ill-prepared for surviving the desert, Adan hits the road only to suffer heat stroke. Found by a local handyman, he catches a glimpse of a mysterious girl—Rose—running through town, and follows her into the mountains where they are both tracked and discovered by the men of the FLDS community.

With their fates now intertwined, can Rose and Adan escape the systems locking them into lives of abuse? Will Rose be forced to marry the Prophet, a man her father's age, and be one of dozens of wives, perpetually pregnant, with no hope for an education? Will Adan be returned to the foster home where bullying and cruelty are common? Is everyone they meet determined to keep them right where they belong or are some adults worthy of their trust?

Anne Montgomery has worked as a television sportscaster, newspaper and magazine writer, teacher, amateur baseball umpire, and high school football referee. She worked at WRBL‐TV in Columbus, Georgia, WROC‐TV in Rochester, New York, KTSP‐TV in Phoenix, Arizona, ESPN in Bristol, Connecticut, where she anchored the Emmy and ACE award‐winning SportsCenter, and ASPN-TV as the studio host for the NBA’s Phoenix Suns. Montgomery has been a freelance and staff writer for six publications, writing sports, features, movie reviews, and archeological pieces.

When she can, Anne indulges in her passions: rock collecting, scuba diving, football refereeing, and playing her guitar.