Let’s talk about olives. Specifically, green olives. I’ve always been a fan of green olives, the kind with the cheery red pimento stuffed inside; they have a flavor that can’t be compared to anything else, they’re just…olivey. As a kid I remember pictures, posters and TV ads for restaurants, depicting perfectly stacked and delectable looking sandwiches, their sharply cut triangular halves topped with a perfect green olive, all of it held together by a toothpick.

I don’t think that’s where my love of the green olive came from though. There’s a story in my family of how I ate an entire jar of green olives (pimentos included) when I was 3 years old. I hid under a table and gorged until the jar was empty and then promptly vomited all over the living room wall. To this day my mother still thinks they used green olives in the famous scene from The Exorcist. But I wasn’t deterred. My love of green olives lives on.

Which brings us to today. While the ubiquitous orb is no longer prominently featured as a sandwich topper, it is integral to a good straight vodka martini. It’s here that I need to make a confession. I don’t particularly like martinis. My wife, however, does, and she says I make a pretty good one, so I’m going to tell you my secret.

Actually, it’s not much of a secret and by now I’m sure you’ve figured it out. Olives. Mmmm, green olives.

I know flavored vodkas are all the rage, but imagine eating raspberries and green olives together in the same bite. Exactly. We’re making a straight martini here, a la James Bond.

Prepare the Glass
Ideally, though not necessary, you have a classic martini glass (an inverted cone on a stem). Why? Because martinis are served cold and holding the glass by the stem prevents your hand from warming the drink. There are a couple of ways to prepare your glass. The one I prefer is to keep your favorite martini glass in the freezer so it will be nice and frosty. Another way is to put some ice and water in the shaker, mix them up a bit to get the water super cold and then pour it all into your glass and let it sit a few moments. I don’t care for this option though because any water in the shaker can dilute the drink, but I’ve seen bartenders do it so maybe I’m just being picky.
The Method
Fill the shaker half way with ice cubes.

Next add a splash of dry vermouth. This is really all about personal taste so you’ll need to experiment. When I add a splash, I tilt the bottle down and back up again rather quickly. If I’m too speedy I repeat the process. If you like your martinis dry, once may be enough! But you must add vermouth in order for this drink to be a martini. I have a friend who likes his martinis so dry, he waves an open bottle of vermouth over the shaker like a voodoo shaman so only the fumes will settle on the ice cubes. That, my friends, is not the driest of martinis, it’s vodka on ice. So, again, add a splash or two of vermouth to taste.

Cap the shaker and get your groove on! Shake that shaker! Shake it until it turns frosty and your hands hurt from the iciness. This will ensure your martini is completely mixed and at a nice cold serving temperature.

Once you’re satisfied with your shaking, quickly spear a couple of olives with a toothpick; personally I like three olives on the stick. Place the skewered olives in the martini glass and then gently pour your drink over them. If you’ve never used a martini shaker before, the ice stays in it. Depending on the model you have, the top may have a built in strainer, or if you prefer a hand held one, that’s cool too.

This martini is basic and straightforward to make, but the secret is all in how it’s prepared. Just like a chess game in my book, <b>Even Dead Men Play Chess</b>, there’s an art to preparing something that’s to be appreciated.

All my best,
Michael Weitz 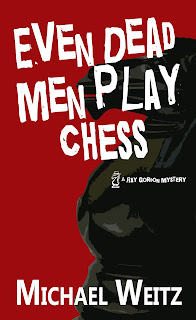 Sit back and enjoy your martini while you glimpse into Michael's novel.

Making house calls or meeting people in public places is how Ray Gordon makes his living. He’s not a doctor. He’s not a prostitute. Ray Gordon is a chess teacher.

When one of Ray’s students, Walter Kelly, is found dead in his shop, the police and his family let it go as an accident. Ray, however, doesn’t buy it. As a former cop with a lingering curiosity, Ray snoops around and stumbles into the murky world of methamphetamine, the worst drug epidemic of our time.

The problem? Walter Kelly was sixty-five years old and his only addictions were woodworking and chess. How does a sixty-five-year-old man become involved with illegal drugs? Why is a neighbor glad Walter’s dead? And just how do dead men play chess?

To take my mind off the task at hand, I thought about Brian Kelly. Was it just the cabin going to waste that rubbed him the wrong way or was it the land value he was afraid of missing out on? Real estate assessments had been big news over the last month or two. Housing prices and land deals had gone berserk and sellers were making massive profits. Maybe Brian was in trouble financially and he just couldn’t take it anymore? Walt refused to sell and Brian killed him for it, knowing the cabin would eventually come into his hands or he would at least be able to talk his mother into putting the land up for sale.

Outside, I heard Ed Carter’s back door creak open and closed. I poured fresh water over the floor and started mopping it up. If Ed planned on being neighborly again, I didn’t think he needed to witness the clean-up process. But after several minutes passed without an appearance from the Kellys’ neighbor, I began my attack on the table saw with a scouring pad.

Just as I got into a nice scrubbing rhythm, Morphy growled low in his throat and raised his head off of his paws. I stopped and watched him. His ears were erect and his gaze was on the window behind me. Goose flesh erupted on my arms. To hide the shiver that ran down my spine, I resumed wiping down the table saw with calm casualness. I kept my attention focused on Morphy, though, and he growled again. This time, the hair over his shoulders stiffened and rose up as his emotions kicked in. Someone was watching or trying to look in the window. Morphy wouldn’t get so angry over something like a skunk or a cat.

I twisted around just as Morphy leapt to his feet and barked. Someone ducked down before I could see a face. I ran to the door and pulled it open. Morphy tore around the corner, barking after the intruder and I followed as close as I could.

In the darkness of Margie Kelly’s backyard, I saw Morphy’s blond fur disappear into the black shadow of Walt’s shop. He chased a dim figure, which ran toward the back of the property, to Helen Parker’s house. I ran full out once I saw the shadowy form of the person who had been spying through the window. Gone were the trepidations of twisted ankles and bloodied shins from unseen objects lying hidden on the grass.

For a limited time, the bestselling book that started the Ray Gordon series, Even Dead Men Play Chess, is available http://www.amazon.com/Even-Dead-Chess-Gordon-Mystery-ebook/dp/B00X1MYZP0/ref=tmm_kin_swatch_0?_encoding=UTF8&sr=8-5&qid=1436709278 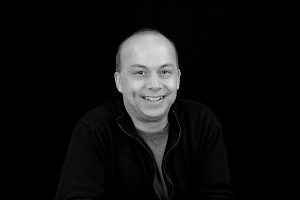 Michael Weitz is an award-winning author who grew up in the Pacific Northwest, usually reading anything he could get his hands on. He wrote his first novel in the 6th Grade -- an eight page rip-off of Star Wars.

A variety of jobs including waiter, gas station attendant, truck driver and a host of others, helped shape his world. After college he landed in the television industry where he wrote and produced a multitude of award-winning commercials, two documentaries about Mt. St. Helens and various other projects.

After a few years in Phoenix, AZ, Michael, his wife, and their dogs are back in the Pacific Northwest. Currently working on the next Ray Gordon mystery, Michael may also be found reading, playing chess or shooting pool. As an avid photographer, he enjoys traveling anywhere picturesque with his wife.

Learn more about Michael Weitz on his website http://www.michael-weitz.com and Goodreads https://www.goodreads.com/author/show/821656.Michael_Weitz.