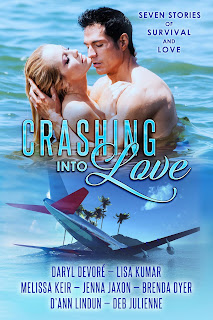 Thank you for coming to chat with us today. Why do you think Melissa Keir choose you to represent her/him? Thank you Dominique for having us today. I’ve brought both Keira and Rob Matthews from my story Crash and Burn in Crashing into Love. I’ll let them share with you.

Rob: Since our second honeymoon, we hardly spend time apart. It’s like we’ve only just married.
Keira: I think Melissa had to tell our story. Too often marriages fall apart and she’s trying to give everyone a second chance at a happily ever after.
Rob: She picked me because I remind her of Mr. Keir. Not in the way I act, but in the way I look. *wink*

Tell us a little about yourself?
Rob: I thought Keira was a spoiled little girl when we first took off for our trip. She even brought her little white dog with us on the trip…aka. Paris Hilton.
Keira: You’ve mentioned that a million times, Rob. Let me share what I thought of you…I thought Rob was cold and uncaring. He spent so much time at work and the gym, I never saw him anymore.
Rob: *bends over and kisses his wife* Let’s not fight. We both realized our mistakes. I’m glad we didn’t let go of our marriage. You were worth fighting for.

Where do you live?
Rob: We live in a small town in Ohio. We’re your basic Midwest couple who head to the local ice cream place for a cone after dinner.
Keira: Small towns have such a wonderful appeal. Everyone knows your name. *sigh*
Rob: Yes, and sometimes that’s a problem. *under his breath* Stephanie. *cough*

What do you wish people would know about you?
Keira: I want people to know I’m not such a bitch. I was really focused on having a baby. The trying and failing got to me. It affected my belief in myself. I’m sure some of the readers could relate. That longing takes over your life and when you think something is wrong with you….you don’t feel beautiful or sexy. Poor Rob. He put up with a lot. *she ducks her head*
*Rob brushes the hair off her face and kisses her cheek*
Rob: I understand…now.

Will we be seeing more of you or are you stepping out of the lime light?
Rob: I’d like to be done with this book business. My life in the lime light was a little much but I know Melissa has plans for my co-worker, Stephanie. So she’ll probably drag us back in. I hope she’s nicer than the last time.
Keira: Who? Melissa or Stephanie?
Rob: *growls* Both.

Is there anything you wish Melissa Keir had kept their mouth shut about?
Keira: She shouldn’t have written about what my sisters said about Rob. It hurt him to overhear it but they are pretty pissed at me. They think it was my fault that they weren’t shown in a good light. The holiday get togethers aren’t the same now.

What’s your favorite sports team?
Rob: The fact that we’re from Ohio means that for NFL football we get to choose The Browns or the Bengals. What a tough choice. Neither’s done well in recent years. But at least I’m not a Steeler’s fan!

What’s you biggest turn ons?
Keira: Strong men who like to tell me what to do. *winks at Rob* Sometimes…
Rob: A wife who knows her place…and when she doesn’t…enjoys the punishment!
Keira *blushes and slaps at his shoulder* Rob! Hush!

What are your biggest Turn offs?
Rob: That’s easy…burnt toast, wet jeans and my wife’s family *Keira slaps Rob again* Hey, it’s true.
Keira: *Huffs* Well my turn off is easy too! Going on a vacation and someone you dislike shows up!
Rob: Not my fault! *under his breath* Stalker.
Keira: More like Psycho!

Do you believe in ghosts?
Keira: Ghosts? If I believed in ghosts, I’d of had a problem on that island. It was bad enough with the snakes. *blushes*

What is your biggest fear?
Rob: My biggest fear is losing my wife. I also made it come true. Luckily I came to my senses in time.
Keira: My biggest fear used to be not becoming a mom. It was a compulsion. Now, I worry more about losing Rob. Without him, I’m lost.

Thank you Dominique for having these two lovebirds over. I think this is the first they’ve left the house since they returned from their trip. Honestly, after a plane crash, I’d be afraid to fly too, but I doubt that’s the reason they don’t leave the house.