July 11, 2015
I'm delighted to introduce you to my author friend Anne Montgomery.

Anne is visiting today with her new release A Light in the Desert, an intriguing Soft Thriller novel I think you'll enjoy. 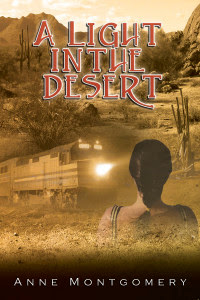 A Light in the Desert traces the story of a pregnant teenager who bears an odd facial deformity, a Vietnam veteran and former Special Forces sniper who, as he descends into the throes of mental illness, latches onto the girl, and a group of Pentecostal zealots – the Children of Light – who have been waiting over thirty years in the Arizona desert for Armageddon. The Amtrak Sunset Limited, a passenger train en route to Los Angeles, is derailed in their midst’s, a deadly act of sabotage. Their lives are thrown into turmoil when local and state police, FBI investigators, and a horde of reporters make camp by the twisted wreckage of the Sunset Limited. As the search for the saboteurs continues, the authorities find more questions than answers. The girl mysteriously vanishes, the assassin struggles to maintain his sanity, and a child is about to be born in the wilderness.

Most of the two hundred and forty-eight passengers on the Sunset Limited were asleep when David Flowers – weaving slightly as the sleeper car rattled along at fifty miles-per-hour – moved along the passageway en route to the bathroom. At the end of the car he saw Mitchell Bates, a twenty-year Amtrak veteran.

“Don’t forget to get me up when we get to Palm Springs,” the passenger said. “Don’t wanna sleep through my stop.”

“Don’t worry about a thing,” Bates responded, smiling. “That’s what they pay me for.”

Two cars back, Kelly sat wide awake, fingers cupped around her eyes, the outside edges of her hands pressed tightly to the window. She could see the moonlit desert careening by, the scattered mountains black against a star-filled night sky. She felt the gentle rolling of the car: a strangely pleasant feeling. A sense of calm surrounded her, maybe because, for the first time since her father died, there were other people who cared about her. Kelly glanced over at Miranda, still engrossed in a two-month-old, dog-eared issue of Glamour Magazine. Had her mother ever had a friend?

Up in the cab, the engineer watched as the massive headlight bathed the track ahead in bright white light. He’d been on this run hundreds of times. A curve that would lead the train onto a trestle that spanned one of the deeper washes between Phoenix and L.A. was just ahead. The headlight blazed – a star shooting in the darkness – wrapping the track in light as harsh as any clear desert day. But the damage was under the rails where no light could penetrate.


****
Ramm was driving on the dirt road that would take him back to the cabin. That edgy, too-much-caffeine feeling gripped him again. He should be on the train, the one protecting Kelly. Had he made a mistake contacting the watchers, which meant he had put himself in play again? The community in which he’d worked for so many years was relatively small and there was always the possibility that word had spread about the debacle in Jerusalem. By contacting the watchers, he might have put himself in jeopardy, which could also bring harm to those around him. Ramm’s head began to pound, the migraine accompanied by a hazy aura. His psychological state was fluctuating. How long could he stay ahead of the problem without medication? What if he blacked out again? What if he was hospitalized and people started checking on him? Feeling impotent, powerless, Ramm jammed on the breaks. The truck skidded to a stop on the soft shoulder where blacktop and dirt merged at the turnoff. He rubbed his face hard then gripped the steering wheel. When he looked up and peered through the windshield, Ramm blinked several times, confused. There, in the night sky before him, floating in a spectral light, was Kelly’s face. Ramm squinted, shutting his eyes tight, then looked again. The ghostly image was still there, hovering before him, her troubled visage beckoning him to follow. She merged with paintings and sculptures – the mother of Jesus in all her quiet grief, the face of Mary on the shimmering white marble of Michelangelo’s St. Peter’s Pieta, on Raphael’s Madonna del Granduca, her desolate melancholy depicted by Masaccio, Veneziano, and countless other artists through time. Ramm painfully unclenched his hands from around the steering wheel. The suddenness of the bright light caught him off guard. His first reaction was to grab for the loaded Glock he kept under the front seat, but when the glare splashed past him, followed by the steady beat of the passing railcars, he relaxed. Then, an unexpected wave of heat engulfed Ramm, and he pushed open the cab door and stepped out, breathing deeply, trying to clear his head. The noise hit him like a blow, shattering the desert calm, causing Ramm to reflexively drop to the ground. He lay there listening to the calamitous groaning, a ghastly noise that washed over him like a rogue wave. To read more from A Light in the Desert please click a vendor's name: Sarah Book Publishing - Amazon - Barnes & Noble 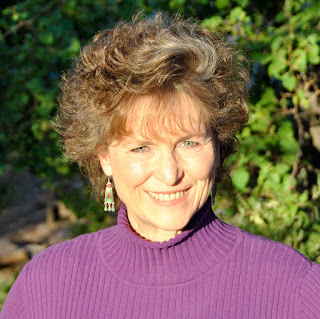 Anne Montgomery has worked as a television sportscaster, newspaper and magazine writer, teacher, amateur baseball umpire, and high school football referee. She worked at WRBL‐TV in Columbus, Georgia, WROC‐TV in Rochester, New York, KTSP‐TV in Phoenix, Arizona, ESPN in Bristol, Connecticut, where she anchored the Emmy and ACE award‐winning SportsCenter, and ASPN-TV as the studio host for the NBA’s Phoenix Suns. Montgomery has been a freelance and staff writer for six publications, writing sports, features, movie reviews, and archeological pieces. When she can, Anne indulges in her passions: rock collecting, scuba diving, football refereeing, and playing her guitar. Learn more about Anne Montgomery on Wikipedia. Stay connected on Facebook, Linkedin, and Twitter.
Anne Montgomery guest author new release