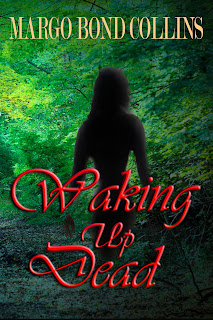 
When Dallas resident Callie Taylor died young, she expected to go to Heaven, or maybe Hell. Instead, she met her fate early thanks to a creep with a knife and a mommy complex. Now she's witnessed another murder, and she's not about to let this one go. She's determined to help solve it before an innocent man goes to prison. And to answer the biggest question of all: why the hell did she wake up in Alabama?


“I know you’re not talking to me,” she said. She stared straight ahead and pushed her cart down the middle of the aisle toward housewares.


“I am talking to you. Look. I know this is really weird, but I need your help.”


“Well, I’m not talking to you. I don’t know what your problem is, but you can take it somewhere else.”


I wanted to reach out and grab her cart, to make her stop and talk to me, but of course I couldn’t. Which gave me an idea.


I scurried out in front of her, planting myself in her path.


“Not until you hear me out. Please?”


She moved her cart to the left. I stepped out to intercept her. She moved to the right. So did I.


“You got some kind of death wish or something?” she asked.


I laughed and shook my head. “If only you knew.”


“I’ve got no time for this,” she said. And she slammed into me with her shopping cart.


At least, that’s what she planned to do.


The shopping cart, however, slid right through me. When it stopped, the basket had sliced cleanly through my midsection. The bottom rack merged with my ankles. From my perspective, it looked like two perfectly solid objects--me and the shopping cart--had melted together. I don’t know what she saw.


Whatever it was, it wasn’t good.


The woman’s eyes widened, then rolled up into her head as she slumped to the ground in a dead faint.


I bent down to try to wake her up, but no matter how hard I concentrated on making contact, I couldn’t even touch her.


I hate being a ghost.
Author’s Bio: Margo Bond Collins lives in Texas with her husband, their daughter, several spoiled cats, and a ridiculous turtle. She teaches college-level English courses online, though writing fiction is her first love. She enjoys reading urban fantasy and paranormal fiction of any genre and spends most of her free time daydreaming about vampires, ghosts, zombies, werewolves, and other monsters. Waking Up Dead is her first published novel. Her second novel, Legally Undead, is an urban fantasy, forthcoming in 2014 from World Weaver Press.
Your website address: http://www.MargoBondCollins.com
Other links you would like promoted, such as facebook, twitter:
Email: MargoBondCollins@gmail.com
Website: http://www.MargoBondCollins.com
Twitter: https://twitter.com/MargoBondCollin  @MargoBondCollin
Google+: https://plus.google.com/116484555448104519902
Goodreads Author Page: http://www.goodreads.com/vampirarchy
Facebook Author Page: https://www.facebook.com/MargoBondCollins
Facebook Novel Page: https://www.facebook.com/pages/Waking-Up-Dead/502076076537575
Tumblr: http://vampirarchybooks.tumblr.com/
Pinterest: http://www.pinterest.com/mbondcollins/
Be sure to add Waking Up Dead to your Goodreads bookshelves: http://www.goodreads.com/book/show/18428064-waking-up-dead
guest author Margo Bond Collins