November 19, 2013
Today we are interviewing Tony Sherman from Dominique Eastwicks Sherman Family Series his story is told in Tony's Haven

They call you “Golden Boy Sherman” and say you bring in business to OMD advertising because you’re famous and good-looking. So what are you famous for? I am famous for coming from a rich family and partying. Really not a damned reason I should be famous, I find it stupid, irritating, and idiotic if you must know.


And why did you choose to go into advertising instead of following in your father’s footsteps like your older brothers?  My Dad is a Doctor and I really don’t think I am the Doctor type. My Brothers went into the “family business” well Lucas and Spencer did but although the family company does advertising I really wanted to try and prove myself elsewhere, not that it made a damned bit of difference anyway they still think I only got the job on the merit of my family. I choose advertising because it’s about making people believe they see what you want them too, it seemed like a good fit.

I understand your best friend, Hunter, is now your brother-in-law and that you have problems with that. Why?  Because the Bastard lied to me…

I would figure most people would like having their best friends in the family. I am coming around to dealing with it in my own way but it will take sometime. Don’t get me wrong I think Hunter is exactly what Jacinda needs but really I don’t want to know about their sex life…I mean I really don’t want to know.
Why do you still have such issues with Hunter being with your sister? I can’t go into that here.

And why did this seem a betrayal to you?  I won’t go into that here.

From what we have been told, you are the carefree playboy. But it turns out this is just an attitude you hide behind. Can you tell us why? Sometimes you can worry and care too much.

If you are so protective of your family, why are you basically lying to them? Because I don’t want them worrying about me, if they think I am in a committed relationship with a suitable women they wont worry about where I’m taking my life. When she dumps me they won’t be surprised either.

And if they love and support you so much, as they seem to do, why haven’t they noticed the real you under the playboy?  I learned really young just how to make them see what I wanted them to see. Thus why I am so good at advertising. (Smiles)

Speaking of being the playboy, why have you kept bringing all those different women to family function? Especially if it upset your family/parents?  At the time I didn’t think they were overly concerned about the girls I brought home. And I somehow got lost in my own game. I forgot for a while that I was more then the image I displayed to the world.

Why did you never have a relationship with any of those women? Have you heard about the women I dated…not really relationship quality.  Honestly I didn’t want a relationship. I have been known to take the Knight in Shinning Armor gig too far sometimes and to be in a relationship for me means I have to be able to protect them.

How can you justify bringing a virtual stranger to the annual family ski trip as your girlfriend? I was desperate and Hunter said something and when Hunter puts his two cents worth in usually it’s a good bet you should listen to it. He said don’t bring your usual bimbo. Haven was someone my family would have never expected and it would have thrown them for a moment. Far better to have them say why is she with Him then why they hell did you bring her.
A girlfriend you mentioned two months ago would seem serious to your family, wouldn’t it? Yes and she was also the usual bimbo, besides I really didn’t want to lead her to believe there was anything to our relationship.

Did you not think your family would be effect by Haven? I knew pretty soon they would love her, Lucas is such a live cannon I wasn’t sure which way he would go or when he would blow. But I knew everyone else would adore her.

What about Haven being there or the promises you made her to get her to go? I meant every word of them, She is already signed up for certifying seminars and classes. Of course I made some of them before I realized how damned amazing and beautiful she was. So I might have broken a promise or two there, but it was a mutual break.


Hunter seemed to know that Haven wasn’t really your girlfriend. Are you worried what he might do since your friendship is still strained?  If there is one thing everyone should know about Hunter its that he is a loyal to a fault, Even with the strain in our friendship he won’t say anything. Hunter comes from the streets and you don’t rat out people on the streets.

You say Haven isn’t your type. What is your type if you don’t have relationships? That is a great question, before I met Haven I would have said my type where ladies that didn’t want anything more from me then a good time and some free publicity in the gossip columns. She would have looked like she walked right off the pages of a fashion magazine,

And if Haven isn’t your type, why do you get so interested in her so fast? Oh where do I begin that doesn’t have you slapping me across the face. I could mention her curves, but I won’t (he winks then chuckles) Haven is amazing, she puts me in my place quicker then even my mother, she certainly doesn’t see me as a pretty boy. When we talk she picks my brains and asked what I feel about things. She doesn’t just chat about fashion, or thank god the tabloids. We chat about business, and what’s going on in the world. I feel like I want to tell her everything about me…And that scares the hell out of me.

You know Haven has an almost six year old daughter. Does dating someone with children bother you? It’s a new dynamic. Have you ever done so before? NO this is the first.

Are you ready for that responsibility? As ready as anyone is.

Do you see a future with Haven? I could see myself growing old with Haven.

What about problems with work… I am not at liberty to chat about the issues at OMD, but you are welcome to field any questions you might have to my lawyer. 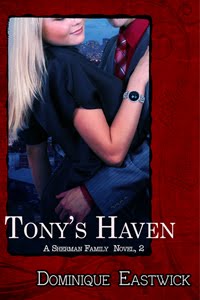 Tony Sherman may be a modern day Adonis and a well-known ladies' man, but hiding beneath his carefree, playboy persona is a man who knows how to be discreet. He keeps his desire to protect all those he loves from being seen by anyone, particularly his family. Fate intervenes when he uses his charm to beg a favor from a co-worker, a women as unaffected by his charisma as she is by his looks.

Haven Pelletier is anything but the kind of woman usually found on Tony's arm or in his bed. She's mousy and rubenesque, unmoved by his Adonis appearance. But when circumstances bring them together, she sees right through his tarnished armor—to the true man underneath.

As Haven learns more about Tony, she discovers a man who might just steal her heart if she lets him. Can Tony be the knight in shining armor Haven needs? Or will the secrets in his past keep them both from finding happiness?