The Duke and the Virgin
Published through Decadent Publishing
April 2014

Can true love be unmasked in just one night or will it be destined to stay on the shelf?

The Marquis and Mistress

Can two broken hearts be mended over the course of one night?

The Earl and his Virgin Countess
Published through Decadent Publishing November 2014
Can Madame Eve show Andrew and Miranda there is more than a contract between them?


Heirs to the Duke Series 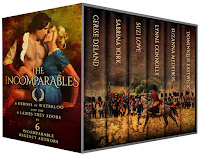 The Incomparables is out of print.

For Love or Revenge


Captain Roarke Wooldridge is about to find out that sometimes love does heal all wounds.But when his need for revenge collides with desires he never believed he would feel again, will he be able to put aside the scars of Waterloo to embrace his future?