An Arranged Valentine by Kadee McDonald

June 22, 2015
Kadee McDonald is visiting today with her new release An Arranged Valentine. This traditional Regency romance novella is a delightful read with strong and heartwarming characters. 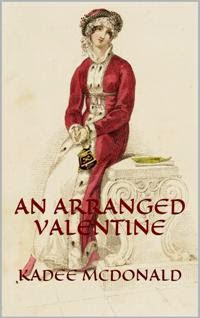 Miss Penelope Braxton has never met either sensible George Harburton or his more dashing younger brother, Henry, but she agrees to grant her dying father peace of mind by considering marriage to one of them.

The advantage of the match for the brothers is evident in the form of Miss Braxton’s substantial dowry. However, her money takes second place when one of the brothers realizes the extent of Penelope’s courage, wit, and devotion.

Henry doesn't plan to give up his philandering to romance Penelope. George's days are filled with the running of his family’s estate and he has never put aside his duties long enough to contemplate marriage. Will either gentleman change his ways and attempt to compose the perfect poetry to win Penelope’s heart?

George stomped into the kitchen an hour later, shaking the rain off his coat and attempting to dislodge from his head the unpleasant business of asking for another account extension with the local grain merchant. Still, doing so was better than explaining to Sir Robert and Penelope that their horses had starved whilst in his care.

Penelope. Would she be their salvation? Always a practical man, George pictured her slim figure and lovely green eyes while calling Laurence to come and help pull off his muddy boots. It was a somewhat ironic task for a footman, but better than cleaning up a trail of dirt if he wore them further into the house.

The rain had begun in earnest while he was in the stables, and Henry and Uncle Solomon would likely be soaked through when they returned. George hoped they might at least have found a pheasant or a grouse for tonight’s dinner table as reward for their trouble.

Divested of the boots at last, George dispatched Laurence for a pair of shoes more suitable to the house and told the servant he would find him working in the library. He needed to make a note in the account books of the additional amount now owed for the grain. There was another, less tedious, but certainly more difficult, task to complete, as well—the writing of the St. Valentine’s Day verse, the first step in his wooing of Penelope.

George paused at the entrance to the great hall, found neither Sir Robert nor his daughter anywhere in sight, and made haste, his stocking feet noiseless on the cold stone floor. Once in the library, he shut the door behind him and exhaled in relief, grateful that their guests hadn’t caught him running about the place like an errant child, with no shoes on.

His heart sank to his non-existent boots. George turned and saw Penelope seated in one of the wing chairs by the hearth, with an open book on her lap and a look of amusement in her eyes.

“Miss…Miss Braxton,” he stammered. “Yes, good morning. I trust you slept well?” Gathering his wits, George embraced his embarrassment and strode forward, seeking the warmth of the fire.

“Yes, quite well, sir. Thank you.” She nodded and smiled, as if finding one of her hosts pacing about, wearing twice-patched stockings, was an everyday occurrence. “I pray I haven’t overstepped by making myself comfortable here with my favourite of Mr. Shakespeare’s plays?”

She held up the volume in question, so he could see the title, The Merry Wives of Windsor.

“Not at all,” he assured her. “But, may I say, what an unusual choice. For I can imagine you enjoying a romantic tragedy such as Romeo and Juliet or even a history, on the order of Julius Caesar, but not a risqué comedy.”

“Do you think I possess no sense of humour, then, Mr. Harburton?” She cast a fleeting look down at his unshod feet.

Kadee McDonald grew up in Texas, but a piece of her heart will always belong to the muslin and lace of Regency England. Kadee now lives in the Los Angeles area and shares her life with her two feline fur babies, Izabella and Juliana. Learn more about on her website and Goodreads. Please connect with her on Twitter or Facebook.
An Arranged Valentine Kadee McDonald regency Sweet Romance