The Silver Moon of Merryn Dexter 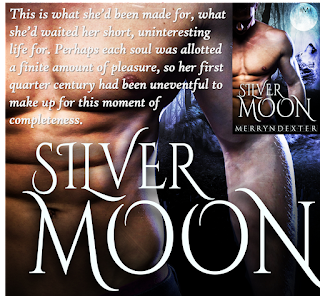 She was in the wrong place at the wrong time
Following the death of her widowed father, schoolteacher Silver Ellis transfers to Central Florida, looking for a new start. Naïve and unworldly, she soon realizes she’s made a mistake. She doesn’t fit in. A foolish attempt to do the right thing leaves Silver on the wrong end of a murderer’s gun. Only the intervention of Palmetto County Detective Jesse Farrell saves her life. Jesse needs to keep her hidden and he knows just the place

He only knows how to destroy in order to save
Kirk Matheson is the last line of defense for the Moonlight Pack. He’s fought hard and dirty to help save the remnants of their small pack. He will do whatever it takes to keep them safe. Of the pack, but not part of them, he is struggling to settle in the pack’s new location.

Witness protection has never been like this!
Silver finds herself in the custody of Kirk, the biggest, meanest man she’s ever met. He attracts her almost as much as he scares her. Once she starts to uncover his secrets, she’s intrigued. Maybe there is more to him than meets the eye.

Kirk is outraged when his alpha insists her takes Silver under his protection. The pretty, curvy human invades his space, driving him crazy with her delicate scent and sweet nature. The sooner he can get rid of her the better, right?

When Silver starts to show an interest, Kirk conceives the perfect plan. He can slake his painful lust for her and, by showing her the monster beneath his skin, make sure she never comes near him again. Her natural passions take him by surprise, sparking a fierce addiction he might never be able to slake.

He’ll sacrifice it all to save her
Betrayal and corruption put Silver in mortal danger. Kirk will destroy everything he’s saved to rescue the human female he cannot live without.

Merryn Dexter is a military spouse who, after a varied employment career (from selling sandals to old ladies with bunions to being a health and safety coordinator for a construction company), is thrilled to be pursuing her dream career as a romance writer. She likes The Winchesters, Spike, Hotch, Loki and watching complicated European Noir. Her hobbies include crying at books, crying at movies, crying at tv serials (there’s a theme!) and believes all stories should have a Happy Ending.

Snarling, Kirk shoved the woman behind his back, trapping her between the door and his thick body. He rounded on the four men, claws forming, teeth elongated and ready to snap. They’d summoned him for a reason and there could be no room for doubts. The woman had been deemed a threat and the situation would be handled.
His way.
Chest heaving like a set of bellows, he studied the four men arrayed before him. Charlie and Jesse looked furious, glowering and struggling against the hold Rand had on them. The pack second looked amused, although Kirk didn’t see anything to laugh about. And Derek looked thoughtful, studying him with those probing eyes of his.
“You’re hurting me,” a soft, feminine voice whispered into his back. What did he care about crushing her? She wouldn’t feel anything soon enough. Still, he eased a few inches away, missing the slight warmth once the woman was no longer squeezed tight between himself and the door.
“Calm down, Kirk.” Derek didn’t bother to raise his voice over the curses pouring from Charlie.
“Not me that needs to calm down. You summoned me, and we both know what that means. Not my problem you chose to involve those who have no business here.” He sneered at the two human males and pressed back against the plump little female until her ripe breasts nestled against his spine. Her small hands braced at his hips, and she made a futile effort to push him forward again.
A look of sadness flittered across the alpha’s face, and he shook his head. “You are what I made you, Kirk, and I am sorrier for that than you will ever know. I should have realized you would jump to conclusions as to why I called you.”
A deep growl rumbled in Kirk’s chest. He was proud to serve Derek and the pack. Every step he’d taken down the road to hell had been taken with the sure knowledge no one else in the pack would have to perform an evil deed for the greater good. He carried the sins of their survival so they didn’t have to.
“I don’t need pity. I just need your orders. I’ve got a dump site already picked out. She’s only a little thing so the gators will make short work of the body.”
“Body? What body? I didn’t bring her here for you to kill her, you freak!” Jesse yelled, straining against Rand’s hold.
Kirk ignored him, keeping his eyes fixed on Derek’s face. He couldn’t ignore the sobs, or the scent of terror, rising from the woman though. Her tears soaked into his shirt, her fingers scrabbled against his back where she fought to get free from his weight restraining her. An inexplicable urge to gather her into his arms and comfort her rose in his chest. He snarled again, using his anger to fight down the conflicting emotions.
“This is Silver Ellis and she needs our protection. Needs your protection. My orders are for you to take her back to the cabin with you and keep her safe from harm,” Derek said.


A bark of bitter laughter escaped Kirk. The alpha must have taken leave of his senses. “I don’t do protection.”
Decadent Publishing Hot Moon Rising Merryn Dexter Pnr werewolf