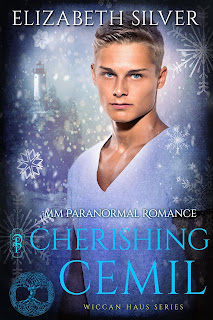 Cemil Rowan’s empathic abilities have outgrown his ability to shield them, and living at the Wiccan Haus has turned into a near-constant fight against the thoughts and feelings of everyone around him. When a new guest arrives with shields so strong it’s like running into a block of ice, Cemil is relieved. But when the guest turns out to be his fated mated, he’s more than a little scared. People the Rowans love tend to wind up dead more often than not.

Ice fae Landon Frostwick was a jerk before he was cursed with a frozen heart, and his attitude has only gotten worse since. But the real problem is that his magic is bound up in the curse, too, leaving him with no choice but to go to the Rowans for help. Finding his cure becomes that much more urgent when he realizes he’ll never be able to love his mate without one.

Add in a pair of constantly bickering warlocks, sibling drama, and Cemil’s increasing migraines, and there doesn’t seem to be any time left for the new mates to get to know each other. Landon has come to the Haus, convinced he can’t feel anything, but Cemil makes him wish he could. Cemil deserves someone who could.

And if it can’t be Landon, he may have to walk away at the end of his week, and never look back.