Today saw something happened that I was unsure would ever take place. The release of Spencer's Chance. Spencer for those of you unfamiliar with my Sherman series is the eldest of the four brothers. He is strong (as all Shermans are) but not the same as the others, Tony is strong in his need to protect, Lucas in his need to fight for those he loves, Trent in his need to save, so that leaves Spencer the one who is strong in holding it all together.

In Hunting JC he is the one to pick JC up when she is out her lowest, in Tony's Haven he is there to pick up Haven when Tony hurts her. But it was in that story that Spencer took a different trek for me. He fell in love with his brothers girlfriend. I hadn't planned that. No in fact my whole plan in Tony's Haven was to show the readers who hated him in Hunting JC the amazing and complex man I knew Tony was but that I failed to portray in the first book.

But there it was Spencer was moving out of character. He was, in fact telling me he was not simply the rock of the family there was more to him. I was so mad at him that although his story was originally supposed to be third in the series (Killing Lucas in my original plan was to be the final book) I was so angry at Spencer, yes this character I created in my head, I told my editor at the time that Spencer needed a 'time out' he didn't deserve his story to be told yet. And of course the original outline for his story no longer worked. I am not sure I can even remember what the story he wanted to tell originally even was. But as with life we sometimes take side roads.

Then slowly his new story came to me. I was ecstatic. He was in my head and so was his heroine. She was to be clearly the exact opposite of Haven yet in a body that could have been her twin. So the story started to flow it came to me quickly at first. Scenes were so cemented in my head, like when Tony's sees Chance for the first time. And then nothing...Writers Block of the worst kind hit me. Real life got in the way and everything came to a screeching halt.

You have to understand I have sort of felt cursed with this series from the beginning. I wrote the first book and it sat in my computer's memory for years. I didn't think I was good enough to be published. I have dyslexia and was told once "Well you will never be published so your writing skills don't really matter." With a condescending pat on my young adult head. So a writer friend and critique partner suggested I send it to Aspen Mountain Press. I did. And wow I got accepted. YEA ME.

The first book released. With no line edits, no approval from me and without me knowing. But I was young to the publishing world what did I know. I happened to go to the sight on new years day and BAM I was now a published author. That was 2010. I asked if they wanted a second they said yes and over the next year I pounded out Tony's Story and kept asking why Hunting JC wasn't on Amazon?  On Valentines the next year Tony published so I was no longer a one hit wonder (you know the 35 books I sold of Hunting JC that first year made me a wonder) but still I didn't have a book on Amazon. How can you be an author and not have a book on Amazon right?

Over the next Six Months I began to realize things were not as they should be with my publisher. And like many others I could see the writing was on the wall it couldn't be saved. But in that time I didn't write at all, my publisher owned the rights to first refusal of any book with the Shermans in it.  That meant I couldn't take them somewhere else and things were bad. So I resigned myself that I would have to wait out the 7 year contract to let them see life again.

By September the publisher closed and my babies were taken on by a new fledgling published. I had great hope. I started writing again and I did a quick short story so that the Sherman's would see light again while I pounding out a new full scale Sherman. Spencer, though I tried, was not going to be next but instead it was quiet angry Lucas who came to the front demanding it was his time for a HEA. But somewhere in writing Lucas and reediting the first two books my editor became Team Spencer.  She loved him called him her woobie.


THE RUG IS PULLED OUT AGAIN

Killing Lucas is published, and so I get writing on another short for a Sherman Cousin that will allow me time to buckle down and focus on Spencer. And then I sit up in the middle of the night and the whole story comes to me. In a flood of images in my head I know Spencer's story so I start to tap it out relentlessly.

But then my editor leaves the company. Being Dyslexic having dealt with people who weren't understand it was devastating to lose someone I trusted. I understood completely her need to leave. She had hung on as long as she did for me. But I was locked in fear as to who would edit me. I felt like I was in forth grade again with my teachers nails digging into my shoulder as she called me stupid. The editors were all amazing and anyone of them would have done my book justice. But there was still the fear of the unknown.

So wait for months for the book to be beta'd went though two betas and took 6 months. Then finally to an editor another six months then to a third editor. OH I think I forgot to mention the publishing house then closed. Yep during this time my second publishing house closed.


All BY MY LITTLE INDIE 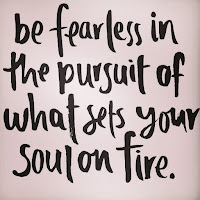 In all of this chaos and uncertainty. Somehow two years from the time I wrote the beloved words the end. I was able to have the surreal moment of pressing the publish button at Amazon, ARe and Barnes and Noble.  Here is hoping the curse is broken. The Shermans are firmly in my control although I prefer to have my books with publishers for so many reasons, this series will remain self pubbed. So now I have two more stories to write. One Short this one will be with Agent Vassar from Hunting JC and Killing Lucas. And Fiona the Sherman Cousin. And then its time to finish the series with Trent. I don't have his book firmly in my head but I do know it will be both cathartic and heartbreaking to write. Saying goodbye to this family will be the hardest thing I will do in my writing career. They are my first babies.

Now, in the present, the panic sets him, have I done justice to Spencer who is beloved by readers and will they like a heroine who isn't as strong as my others but see that they are exact what each other needed?

It is now out of my hands for good or bad and in the universe for others to decide. 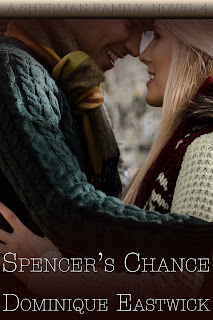 Spencer Sherman knows how to run a business; he understands his employees, and the market around him. But he has lost his way when it comes to love and family. With a rift with his younger brother and unrequited love of his sister in law, Spencer has taken a wrong turn somewhere and it just so happens it might lead him to his heart’s desire.

Chance McKinney is content with her simple life. She is adored by her family and friends and no one can turn down her apple pies. Yet being the friend has worn thin and this virgin doesn’t see anything in the area that will change things. Until a tall, gorgeous stranger walks into her shop and turns everything she once thought on its head.

Can two people from different worlds find the love they both desperately crave or will mistakes from the past prove too much to overcome?