June 05, 2015
Rain
A Beyond Fairytales story
By
Taryn Kincaid
A dystopian retelling of Sleeping Beauty 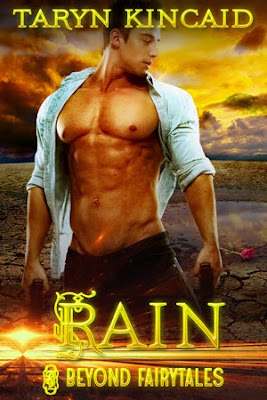 In a world gone mad, where little remains but a vast wasteland of sand, the leader of a troop of roving warriors welcomes a brave young woman into his midst.
Much as he burns for her, Major Clay Worthington swears to keep his distance from the mysterious woman, so sensitive even the stinging rain can wound her.
Rosina Brierly is besotted with the formidable soldier and will gladly trade her life for one torrid night of blissful passion in his arms.

But when sleep overcomes them, will true love prevail?

Excerpt:
Does the major ever feel lust? Does he covet a woman’s touch? He never gave any sign he did. Too aloof and austere, too remote from the simple emotions of mere mortal men.

He shook her again. “Wake up, princess. The rain will come soon.”

The men looked forward to the rain. They hated the relentless sun blasting down upon them, as if they thought it would incinerate what was left of the earth beneath their boots, baking the soft sand into badlands as hard as concrete. They’d strip off their T-shirts and boots, their combat fatigues, and sometimes even their camouflage boxer shorts, and dance and play, naked or nearly so, in the slanting gray soup, laughing, tossing round balls or throwing saucer-shaped plastic discs to each other.

For her, the showers had the opposite effect. The stinging rain sliced into her sensitive skin like acid, raising blisters and sores, sometimes bloodying her.

She did not know why the major called her princess. Perhaps he didn’t know either. Whatever royalty once walked the earth had long gone, fled underground or died in battle or simply disappeared. The war engulfed every human on the planet, every inch of land, and had waged so long she doubted anyone remembered anymore. Well, maybe Nicodemus. At least he sometimes hinted he did in the stories he told. And she had seen him whisper into the major’s ear, unknown things that made the major pale beneath his weathered tan.

Major Worthington did not treat her like a princess, though, except when she slumbered, when he knelt before her in her fantasy world, his head bowed, his fist over his heart, laying his sword at her feet and claiming the role of knight. Her hero. Her champion. When she awoke, he remained one of the elite warrior breed roaming the planet, bristling with weapons like the soldiers he led. He treated her as the translator she was to him, sometimes barking orders to her as if she were one of his men, only occasionally seeking her counsel.

She came fully awake as he jerked her up from the ground and yanked her toward him. The glare of the setting sun broadsided her, hurting her eyes. Why was he so insistent about the impending rain? No clouds yet darkened the sky, although the hour sped toward evening dusk now. But no hint of shadow yet blotted the horizon.

“I can smell it,” he muttered.