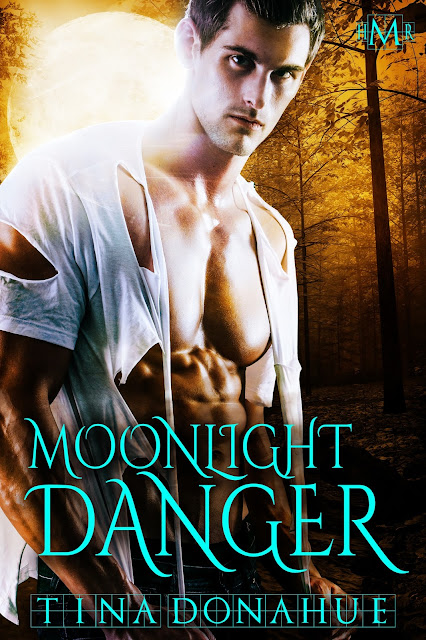 Alone for too long, they’ve finally found each other and home.
Now, they’ll have to fight to keep both safe.

Nick Wyatt lost his mate and vowed never to love again. The hurt’s too deep. Portia Danes knows about loss. When her parents were killed, they left her as the only shifter in their hometown. Needing to be with her own kind, she found Moonlight…and Nick.

Nick fights his longing for Portia but can’t resist, coming alive within her loving and lusty embrace.

Heated days and nights follow. Their bond grows and so do a series of strange accidents in Moonlight. Minor at first then increasing in gravity and frequency. When the pack’s suspicions ignite about Portia, Nick must defend her against an unexpected enemy or risk losing her forever. 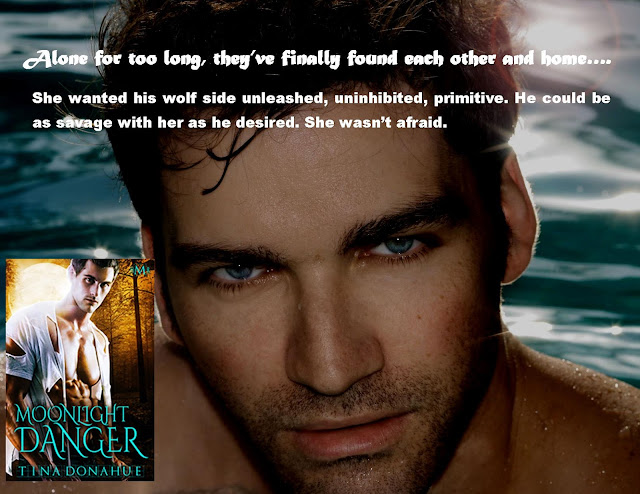 “Before I cook our steaks, do you mind if I cool off first?” She already sat on the ground, untying and tossing her boots aside. Her adorable socks followed. She’d painted her toenails deep red and had another flower tat on her ankle.
Nick wanted to taste it, his mouth watering.
“Can you believe it’s so hot already?” She unhooked her overalls straps and unbuttoned each side of the garment near her hips.
“What?”
“It’s hot, don’t you think?”
She leaned back, wiggled out of her overalls, and tossed them aside. Her panties were a scrap of some silky material edged in pink lace. He wouldn’t have expected any other color. “Ah….”
She dropped her tank top on the denim. Her boobs filled her pink bra near to overflowing, the gentle mounds quivering with each movement and breath. Effortlessly, she glided the straps off her arms, unhooked the bra back, and lobbed the garment onto her growing clothes pile.
He stepped forward without meaning to, transfixed by her nipples, a deep rose as he’d guessed, puckered and tight, ready for a man’s mouth.
Portia didn’t flaunt her partial nudity. She appeared far more casual than he as she slipped off her panties. No wait, she’d worn a thong. His skin tingled.
She chucked the underwear on top of her bra and stood. “You must be hot, too. Want to join me? Plenty of room.”
Nick figured she’d gestured to the water, but he couldn’t concentrate on anything except the springy curls between her legs. That delicate pelt was as dark as her other hair. Her cleft and puffy lips pointed the way to paradise. At least for a little while. After that….
He should leave.
She padded to him, taking his hands. “Join me when you’re ready. We have all night. I’m not going anywhere but here.”
Three small moles circled her navel, fascinating him. A light sprinkling of freckles graced her shoulders. Although tall and athletic, she was surprisingly narrow, seeming so delicate.
She had more courage than he did, facing him with unashamed desire and patience.
Nick wanted to make a move but couldn’t quite break free from the past, telling himself he shouldn’t. He deserved to remain alone forever. She kissed his knuckles. His lids slipped down. He ached with need and resistance.
True to her word, she stayed relatively close, slipping into the water, the brief waves lapping her thighs. “Wow. Almost as good as a shower.”
She poured water over her shoulders, breasts, and belly. Her delicate curls trapped the moisture that sparkled in the remaining daylight. Soon, the heavy moon would rain its silvery light on them. If he were still here, which he wouldn’t be.
He edged closer to the bank.
After dampening her neck, she lay on her back, floating, face turned to him.
He didn’t recall taking off his work boots, socks, jeans, or tee. When he wore nothing except his stretchy boxer briefs, he considered what he was doing.
She patted the water, encouragingly. “Hop on.”
“On?”
“In. Always mix those up. Come on, you need to cool off.”
With both of them in there, they’d probably bring the damn stream to a boil. Warning bells rang. Loneliness and lust won. Shutting down his misgivings, Nick peeled off his underwear. He stood above her, naked and fully aroused, letting her get her fill of the man, the beast he was.