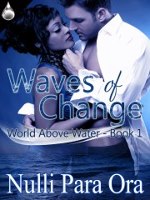 This exciting paranormal romance of danger, war, and the struggle to control two worlds, takes you beneath the waves of earth’s vast oceans and reveals a secret no mere human should know. As the battle rages, a very human woman becomes a pawn! Only one man, her unknown soul mate, can save her . . . or can he?

Water gives life, but under the control of a secret race of people, the most abundant element on earth can be a powerful weapon. The Leuk Ahnal have a unique connection to water—they can manipulate it, use it for communication, or even use it to take over another person’s body.

Hot on the trail of his enemy, a Pa lel enforcer discovers the love of his life. But there's a problem. The Ver-Rist Tokos have an unexplained interest in her.

Water is power when two kingdoms fight for control. Is one man’s love enough to protect his woman from the threat beneath the surface?

To learn more about Nulli Para Ora check out her Website