December 27, 2017
So I actually did it I finished a series. Can you believe it?  I can not. Anyway so here is the forth installment in the House of Lords series. A series that was never meant to be one. But none the less became one.

When I wrote Duke and the Virgin. I never expected it to be anything but a one off. A dare to place the Decadent publishing 1 Night Stand series into the Regency time period. But it did well and my publisher asked me to write more so the men in the mysterious poker game came to life and now all four have their stories.

It's bitter sweet to end a series and say goodbye to characters that I have enjoyed getting to know. But its also comes with a sense of accomplishment. I actually finished what I set out to do. We may see these men in the background should I venture back into this genre again who knows.

For now enjoy the final installment. :) 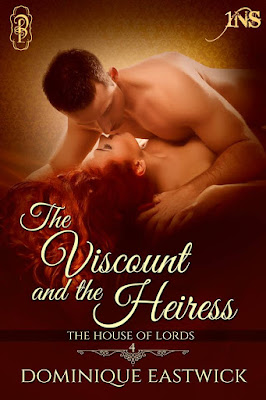 Love doesn’t come easy and sometimes when it does come it isn’t strong enough to weather the storm. That is what Jonathon Edward Railey, Eighth Viscount of Aunton, found out the hard way. With his burden of family debt and eight younger brothers to feed, what woman would stick around?Miss Isabel Hathaway might have loved the viscount once, but she would be damned if she would allow him to marry her for her money. Better to have never loved at all then to have him bought.When fate throws them together again, will the love they once had be enough to see them through a new storm? Or are they destined to a life of want and heartbreak?