Scent of Murder by Cara Carnes 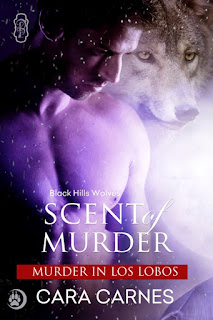 Heartbreak and hardship have returned to the Taos pack. Even though survival is a rote course for Dani, a woman can only handle so much. Her brother’s mate has been murdered and he’s missing. The pack Alpha was left for dead at the scene. Oh, and her ex-lover has been tasked with finding her brother.

Thane returned to make things right with the healing pack and the female he left behind. Leaving had been the only option that kept Dani safe. Now he’s back and not about to let her or the pack down again. Despite the tense situation, his wolf refuses to ignore the woman determined to “help” find her estranged brother. One way or another, she’d be his.

“Depends on what?” she asked, willing her mind back to the conversation even though her brain was still refusing to accept he was real. She’d stumbled into an alternate world, fallen into a heady dream where second chances were possible.

“Why does it matter how I found out?”
“Why did you bother finding out?”

“Does it bother you I did?”

“Does it bother you I want to know why?”

A growl punctured the air as he charged the distance between them and dragged her against his hard body. Her hand hovered over his chest. Not hers to touch, to claim.

“Now’s not the time to play games, Dani. I asked you a question.”

“I asked you a question too.” She dared a hesitant gaze up and the breath she’d held tumbled from her lungs.

His scent wafted in her nostrils, goose bumps formed wherever their skin touched. And those lips. She’d missed them the most, the way one kiss from him carried her into a world where no one existed but them. He’d kissed her often, too. Everyone said she lived in a Thane-induced haze.

“Just because I left doesn’t mean I left you, Dani. I did a lot of messed up things back then and my staying could’ve have a backlash. You would’ve felt it.”

“I did,” she whispered as her fingers settled against the cotton stretched across the groove between his pecs.

He grasped her hair and tugged until their eyes locked. Her pulse pounded wildly in her ears, her body tightened against him. “Why did you cut your hair?”