May 28, 2015
The Incomparables: 6 Heroes of Waterloo and the 6 Ladies They Adore
This limited edition box set includes 6 scorching romances that commemorate the 200th anniversary of the June 18, 1815 Battle of Waterloo. 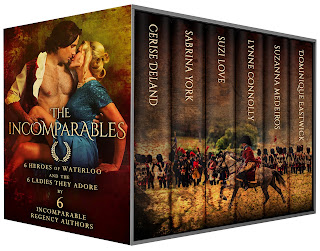 From the Duchess of Richmond’s ball in Brussels to the Battle of Waterloo and beyond, join these six unforgettable heroes as they journey back from the physical and emotional trials of war and discover the passion that thrills the body can also heal the heart.

Read more about this steamy collection! 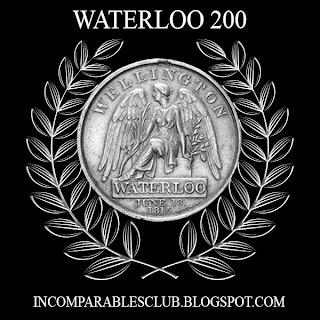 For Lover or Revenge
By Dominique Eastwick
Captain Roarke Wooldridge returned from Waterloo a different man than the one who left. Captured and detained as a prisoner of war, he endured both torture and betrayal at the hands of his captures and a single traitorous turncoat. Now those who survived the nightmare of that cellar in France are determined to get revenge.
The widow Lady Alexandra Grafton is quite content to live out her life in the country cottage her husband left to her in his will. Having been married to a man with one foot in the grave, Alex has no desire to enter the confines of marriage or its bed again. But when a handsome, haunted captain crosses her path, will she take a chance on love?
Can two people scarred by their past experiences find in each other the solace they so desperately crave? Can the power of love outweigh the desire for revenge or are their wounds too deep to be healed?

“She is utterly—amazing.” His face lit with genuine love as he spoke of her. Getting back to his feet, he moved to his chair on the other side of the hearth. “Perhaps when you are in town for the season, I can introduce you to her. I think she would enjoy your friendship. She complains about the lack of honorable people within the ton.”
“One of the many reasons I stay away. It took very little time for the shine to dull on ton life. But I think I would very much like to meet her.”
If he felt Alex and he would run into one another out in society, his family must be part of the ton. His manners and speech spoke to a man who had been well-educated. “I would like that, as well.”
She couldn’t remember the last time she had looked forward to parties or balls. Unfortunately, shortly after her marriage, her husband had placed her in his country estate, fearing she would take a lover and try to hoist her bastard off as the earl’s. But, she would never have cuckolded him or caused him embarrassment. Life in the country fit her best. And he had treated her far better when they were away from the expectations of society. The few times they’d been required in London had been the most miserable of her married life.
Alexandra hadn’t attended a season in nearly ten years. And that had been for her own. Bad memories had a way of keeping a person from returning. During her marriage, she hadn’t wanted to be paraded out as the young countess, a title she never quite felt comfortable with. And after the earl passed, she saw no reason to head into town for the season when everything she wanted lay within these walls. She had no desire to remarry, and, as children required the act of copulating, she had long ago resigned herself to a life without them. Although she had desired children, she was long past hoping for them. Until now, that is, when this handsome captain had come into her life, weakening her knees and causing a pool of desire to form in her belly.
Picking up a fan from the side table, she waved it near her overheated face and neck, the temperature of the room having suddenly risen.
“What about you, Captain? Are you married?”

Award winning author Dominique Eastwick currently calls North Carolina home with her husband, two children, one crazy lab, and one lazy cat. Dominique spent much of her early life moving from state to state as a Navy Brat. Because of that traveling is one of her favorite pastimes. When she’s not writing, you can find Dominique with her second love…her camera.