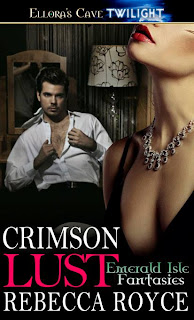 Part of the Emerald Isle Fantasies series.
Felicity Hahn is a thief on the run in Ireland. She can’t go home and spends every day hoping Interpol doesn’t catch up with her. But when she steals a crimson-red necklace, she may have gotten more than she bargained for.
...
Cian Finnegan is a vampire who was turned outside the gates of Castle Tullamore over three hundred years earlier. He chases the woman who stole his necklace back to the castle, now a hotel, both to recover his possession and because her scent makes him as hard as hell.

Can the magic of the Emerald Isles give these two a happy ending, or is it too late for them both?
http://www.rebeccaroyce.com
Ellora’s Cave Publishing new release Rebecca Royce