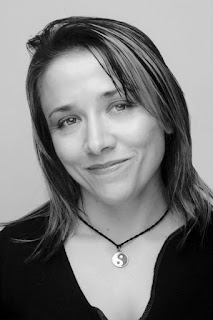 Domestic abuse runs rampant in today’s society. The statistics are staggering, and those are just the reported cases.

I’ve not been a victim of physical abuse, but I grew up with it around me. As a child I didn’t know what to do about it. As a strong woman, I fight.

There are many tactics of abuse that are just as horrible, if not worse, than the physical. A lot of emotional scars are left behind by abusive relationships. I knew someone who was so beaten down by their spouse that over the years it had become something of a “Stockholm Syndrome” scenario, where the victim is under so much strain that befriending or loving the captor becomes the only way to cope with the situation.

This is something I touched on in my suspense novel Sins and Virtues. My female lead, Sam Mitchell, has been through years of abuse at the hands of her husband, so much so that it has changed her as a person.

I paint her with a brush of a woman trying to piece back together her life after terrible circumstances. Her human frailties are exposed in a raw way as I peel back the layers of Sam and open up those emotional wounds that run so deep.

When writing about her, I portrayed her as overwhelmed and exhausted from carrying around this turmoil for so many years. I’ve known this type of energy-drain myself. In a foolish attempt to rescue, or change, my ex, I wound up pouring all my strength into him only to have him turn around and shun me.

Boy, I tell you as a woman and writer, with my emotions at surface level, that this was a bitter pill to swallow. It left me feeling very weak inside, like a shell of my former self. When you give of yourself, whether it be love or anything else, and it’s returned to you with a harsh word, a fist, or in my case, indifference, it can really mess with you mentally and emotionally. You start asking yourself questions. “What did I do wrong?“ “Did all those promises really mean anything?” And mostly, you ask “Why?” We all have to come to our own answer for each situation, particularly when you have had no real closure.

There is, however, a lesson in all experiences. Whatever doesn’t kill you makes you stronger--eventually. What lesson did I take away from my experience? You can’t change people. Only they have the power to change themselves. So in the end, giving away my power helped no one-- it only hurt me. I had to rebuild my life, but at least I came out stronger and wiser.

In Sins and Virtues there is a line that reads: “I don’t place blame and I try not to judge. You are resentful of things that we are all guilty of doing. Everyone wants to be accepted for their sins as well as their virtues. You cannot blame people for seeking compassion; it’s one of the most beautiful of human emotions I have ever come across. People are going to think whatever they want, and ultimately do whatever they want, but nobody should pass judgment on another human life. I know people disappoint, but you have to realize that we are all just doing the best we can with what we’re presented.”

I try not to judge and I no longer try to change or fix people. Life goes on, and I just try to live mine to the best of my ability. But to quote a Dixie Chicks song: “Forgive, sounds good. Forget, I don’t think I could.” 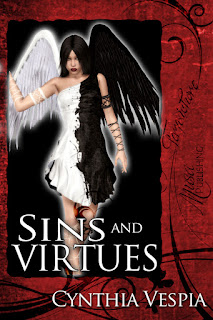 “Are there any other weapons in this house?”

“No.” His answer was blunt and spoken too fast. She nudged him with her knee so that he would look up at her. When he didn’t budge she had to squat before him to take in his eyes.

“Did you just wake up this morning and decide to ruin a man’s life?”

His defiance of her was shocking. She turned her attentions now to the knife. Taking it from atop the mantle, she twisted it in her grip. “I should gash out your eyes for that remark.”

“I have no doubt that you would.”

“It’s just that for whatever reason I was feeling a certain amount of compassion for you.” He’d been avoiding her gaze as if searching for some kind of revelation at the back of his mind. Now he turned back to her and it made Sam jump. “I feel like a fool. You’re nothing but a criminal. You don’t deserve compassion.”

He’d gotten her juice up and she was going to let him know about it. A swift back hand brought quick crimson to his lips. “You don’t know the first thing about me,” she shouted. “You sit here in this fancy cabin living the most mundane existence I’ve ever seen and you dare to pass judgment on me? You don’t know shit, buddy.”

“And you don’t know shit about me either.”

His tone matched her aggression. She was taken aback by his forward attitude but only for the moment. Standing with the knife in hand, shouting her aggressions, Sam flashed back to the last hour with Tom. She’d blocked it from her memory for the longest time. It had returned to her only sporadically in prison. Now she saw it all.

He’d been hateful that day, on a rampage about something useless. He was her enemy and her lover all in one and he was dragging her by the hair up and down the halls of their studio apartment.

At that point Sam realized it was either going to be her life or his, someone was going to have no future. After Tom had barrel rolled her into the refrigerator, shouting something about making dinner, Sam rose on shaky legs and moved quickly from the room. Tom was close behind her; she wanted him to be. She’d lead him to the bedroom, moving just paces faster than him as he screamed obscenities and closed the gap.

Her heart had been pounding, but her mind seemed calm and serene, as if the moment she made her decision the whole spectrum of the world fell into place. The box of blades was stashed in a secret lock box behind the headboard of the bed. Sam had just finished polishing her babies about a half-hour before, so the lock was disengaged. She had selected her favorite, a twelve-inch masterpiece with serrated teeth and a polished black handle, then waited patiently with it behind her back.

Tom came for her with a head full of rage and Jack Daniels over ice. When he’d caught up to her, he slowed his pace but still moved in long strides. He had been intent on sending her to the emergency room this time, or even much worse, she could see it in his eyes. But when he reached out, she had a surprise waiting for him.

The first cut ran lengthwise across his extended arm and lacerated not only his tanned flesh but also his very best button down shirt. His reaction was precious as he jolted backwards in shock, but it wasn’t nearly as satisfying as the priceless expression on his face when she’d impaled him. It was ironic that the one act that freed her from his control had actually taken her freedom.

Now, standing over Ben, she began to dwell in the anguish of it. Before she knew what was happening, she brought the knife downward in a hard and swift arc.

Available through Musa Publishing; and CynthiaVespia.com